The pictures above and below were taken at Abu Ghraib Prison in Iraq during 2003-2004 and outline how some of the prisoners were mistreated by US military personnel.

The Stanford Prison Experiment (1971) was a psychological experiment conducted by Professor Philip Zimbardo, whereby he wanted to observe the psychological effects of being a prisoner / prison guard. This study is famous for the highly unethical methodology which involved the ‘prison guards’ essentially subjecting the ‘prisoners’ to psychological torture – which was encouraged by Zimbardo as the experimenter.

The experiment was stopped after only 6 days, and some people have attributed the extreme role playing by the ‘prison guards’ as being caused by the situation and the power of authority, rather than the individual personalities of the participants playing the guards.

During the time of the Iraq war (specific 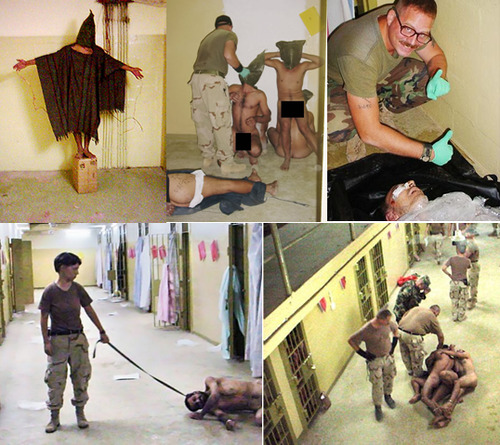 There are several reports of rape by US soldiers of the prisoners, and some accounts where other soldiers took photos. There are also accounts of sexual abuse using various objects, and many accounts of torture including strappado hanging.

Additionally, the New York Times reported in 2005, further cases of abuse including;

Zimbardo was an expert witness at the Abu Ghraib trials presumably due to his involvement in the Stanford Prison Experiment, which has some similarities to the abuse of power seen at Abu Ghraib Prison.

Could it be argued that it was the situation that caused the US army to act in such a way, or do you think it was a personality trait of the soldiers involved?

To see footage and interviews with the participants in Zimbardos Stanford Prison experiment click here.