There are real changes happening to our pensions provided by the University Superannuation Scheme (USS). These changes are unilaterally changing our employment terms and will affect us in big ways. My own estimates are not substantially different from Akira O’Connor’s – he bravely shared the estimates on Twitter which showed a loss of over 50% of our pensions when we retire. 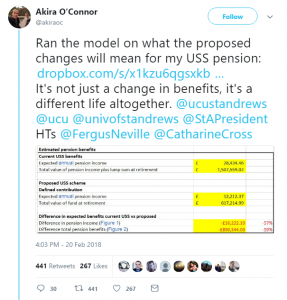 That’s half what we were expecting, half what we signed up for, half of what we planned for. Why is this such a big cut? Well, briefly, the pensions have contributions from employees and employers which are then invested in a mix of high and low risk market shares. These high risk ones have high returns, owing to the health of the USS. And USS is a multi-employer scheme with decent, defined benefits promised to its members. How many employers? 68 well-established ones. So, the defined benefit has been generous, owing to the pooled benefits across these pre-92 universities. Also, the risk of USS going under is shared or pooled among these well-established universities, Oxford and Cambridge among them.

As I said, unilaterally, it was decided that the current defined benefit would be scrapped to minimise risk to the universities in the scheme, particularly Oxford and Cambridge seem to have voted for de-risking – where monies are moved from high-risk market shares to low-risk ones, although low-risk ones return very little on investment (see links in tweets below for more detail).

Get out of here, it’s gonna blow

Okay, you might be thinking that pensions are expensive and who, in the sector, is really expecting a pension anymore. Well, the numbers don’t add up. While some suggest that the pension is in deficit and can no longer be sustained so we need to scrap it in favour of de-risking, it seems that an estimation of a deficit relies on certain assumptions. I tweeted about it, citing Marc Owen Jones: 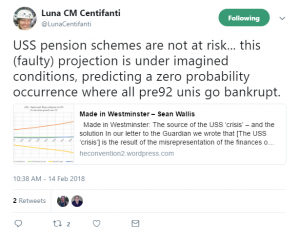 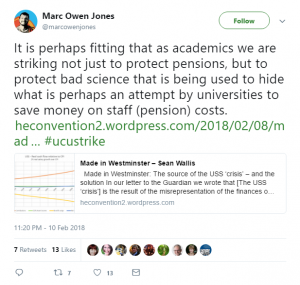 As it stands at the moment, the estimations show that the USS pension is healthy and in surplus, and projections say it should be fine for the next few decades. The worries over the financial viability of our pensions are overstated. The estimations for USS to go into deficit, for example, are based on all 68 well-established universities going bankrupt at once. Frankly, if that were an actual current worry, that would be the higher education equivalent of EVERYTHING IS ON FIRE! So, de-risking is unnecessary and could actually result in the thing everyone is trying to avoid: the USS being in deficit.

Let me off this thing…!

Who is, then, pushing for an end to the defined benefit scheme? Well, it appears that Oxford and Cambridge make up most of the votes to de-risk: Oxford’s and Cambridge’s role in the demise of USS

Why? Well, Michael Otsuka has written quite a bit about this and suggests that Oxford and Cambridge may be worried about their responsibility to the pension as the biggest and most well-established of the universities. There are probably weaker universities that depend on the brick-like (pun intended) stability of Oxbridge. And with the removal caps on student numbers, Oxbridge as well as other universities have been working toward recruitment of many more students. I always say “follow the money”… Having less funds go to pensions frees up more for shiny new buildings. If you can move money to many more assets in relation to the amount of debt you need to report (i.e., pensions), then you can borrow more money for estates and buildings. This is what has been suggested:

Made in Westminster – Sean Wallis

Why does this matter?

A lot of us academics have made sacrifices. What is the reality of working in higher education these days? 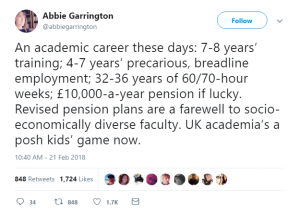 As a US citizen who made a sacrifice to come to the UK with my family members (also US citizens), I am keenly affected. I wrote about it quite frankly on Twitter: 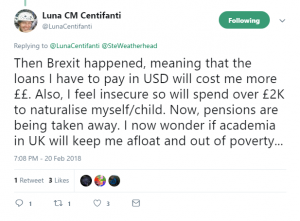 There could be a real loss of a diversity of views in HE in the UK: 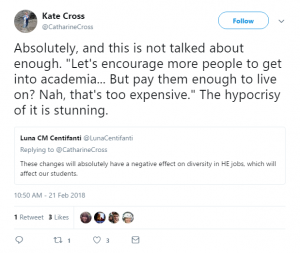 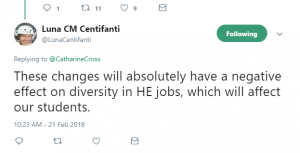 My sentiments as an immigrant were also echoed by others. See this Tweet thread by @RealJDittmer

Finally, a letter was written by an academic about why he is deciding to strike and I think it reflects real human rights and austerity issues that are weighing heavy on many academics’ minds. See that here.

Since about 2010 or 2011, there have been various changes to USS that have meant real payout reductions upon retirement for many academics. These have been reached after negotiations and some minor strikes organised by the University and College Union (UCU). However, the negotiations have ceased on the current changes; UCU reports that management refuse to negotiate even on a proposal to increase employee and employer contributions to the scheme to ensure its long-term viability. As a consequence, this newest change (and lack of negotiations) has seen the biggest support by UCU members with over 80% of members supporting a strike or action short of a strike. This is one of the largest strike actions for HE, with 14 days planned unless negotiations can resume.

I absolutely love my job, love mentoring the next generation, and generally care about human rights and the rights of the poor and disadvantaged. I worry that if we don’t fight these changes, we will have allowed a trickle of austerity that could soon drown us all. We are fighting for no changes to our pensions, because as I said above the USS is in surplus and is relatively free of danger for the foreseeable future. So, let’s sing this together: